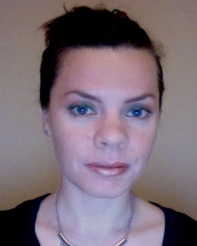 Katherine Bryant is a PhD candidate in Neuroscience at Emory University, where her research interests include network models of cortical connectivity, multi-modal association cortex, and human evolution. Her dissertation focuses on identifying human-unique specializations of the temporal lobe by comparing the white matter connectivity of cortex in humans, chimpanzees, and macaques. She is also receiving training in interdisciplinary graduate studies as part of a certificate in Mind, Brain, and Culture.

* This post was originally featured on The Neuroethics Blog.

[Describing the experiences of subject MMo] Eights are yellow, for example, a square feels like mashed potatoes, and the name Steve is somehow like poached eggs. (Cytowic p. 26)

“…I [asked the vendor] what kind of ice cream she had.  ‘Fruit ice cream,’ she said.  But she answered in such a tone that a whole pile of coals, of black cinders, came bursting out of her mouth, and I couldn’t bring myself to buy any ice cream after she’d answered that way…” (Record of patient “S”, Luria p. 82)

The unexpected sensory pairings described above are the experiences of a minority of people, perhaps 4% of the population (Simner et al., 2006), known as synesthetes. Synesthesia is a perceptual phenomenon in which unusual linkages occur between sensory modalities – sounds may evoke colors, tastes may evoke shapes, or numbers may evoke spatial patterns – in all, over 40 unique pairings have been documented.  Synesthesia creates problems – it defies normal categories of clinical pathology, and yet is clearly different from what we might call “normal” or neurotypical perception. But examining the phenomenon can help us gain a greater understanding of how synesthetes perceive the world, how others perceive them, and in what ways neuroscience can help us better understand unusual neurological phenotypes – what we might call neurodiversity.

A brief history of synesthesia

The earliest known documentation of synesthesia comes from an Austrian physician who provided a self-description of his own “colored ideas” (Sachs 1812, Jewanski et al., 2009).  Sir Francis Galton provided some of the first descriptions of individuals who conceive of numbers in specific, idiosyncratic spatial forms (Galton 1880, 1881). Not long after, physician and poet Victor Ségalen reported an even wider variety of linkages, drawn from multiple first-person accounts: The poet Arthur Rimbaud experiences the letter A as black; a math prodigy describes Monday as light chestnut brown; a Jesuit priest describes his sound to color synesthesia as an “ocular harpsichord” (Ségalen 1902).

The unusual nature of these reports combined with inherent difficulty of verifying personal accounts has frequently lead researchers to conclude that synesthetes are either confabulating, schizophrenic, or using hallucinogens (Day 2002). As a result, many synesthestes feel their personal sensoria render them abnormal, alien – different from “normals” or non-synesthetes. Some who learned to suppress reports of their sensory experiences later borrow language from gay rights movement – “closet synesthetes” will “come out” to family and friends (Day 2002). Modern neuroscientific and psychological methodologies have established the synesthesia as empirically measurable and therefore valid discrete neurological “condition”. Medicalizing synesthesia in this way can both validate synesthetes’ experiences, but also raises some ethical problems.  Scientific researchers and clinicians are often ill-equipped to comment on diversity, but when neuroscientists and neurologists make scientific claims about “normal” and “non-normal” brains, they do, perhaps unintentionally, make identity claims about the owners of those brains. Referring to synesthesia as a “neurological condition” may marginalize and de-legitimize synesthetic experience in the eyes of some, even as it validates it as a “real” experience.  Next, we’ll the research of clinicians who have examined the cognitive impacts of synesthetic experience, without pathologizing the condition, in an attempt to understand the variation between synesthetes and neurotypicals.

Synesthesia and the mechanisms of metaphor

Metaphors like “sharp cheese” and “bitter cold” are understood by most English speakers, despite the seemingly arbitrary nature of the cross-modal pairings. The appreciation of metaphor by synesthetes and non-synesthetes alike suggests a tie between synesthesia and metaphor (Ramachandran and Hubbard, 2001a).  Other arbitrary pairings are appreciated by synesthetes and non-synesthetes alike – in one experiment, a soft curved shape and a sharp jagged shape are presented, and subjects are asked to guess which shape is named Kiki, and which Bouba.  Most pick Bouba for the curved shape, and Kiki for the jagged shape (Ramachandran and Hubbard 2001b; Köhler 1947). The cortical substrate responsible for the phenomenon is the angular gyrus (Ramachandran and Hubbard 2005), an area already implicated some number-spatial forms of synesthesia from a clinical case – a synesthete who lost his synesthetic number forms after a bullet tore through the same brain region (Spalding and Zangwill 1950).

Psychologist A. R. Luria’s patient S was a synesthete with multiple forms of intense synesthethias; so intense, they were impossible for him to ignore. Interestingly, he had great difficulty with metaphor. When asked to explain the expression “to weigh one’s words”, S responds:

“When I hear the word weigh, I see a large scale […] where they put bread on one side and a weight on the other.  The arrow shifts to one side, then stops in the middle… But what do you have here – to weigh one’s words!” [Luria p. 119]

But is S representative of all synesthetes?  Scores of talented synesthetic artists, writers, and musicians suggest otherwise (examples include Kandinsky, Nabokov, Itzhak Perlman, and Stevie Wonder).  The fact that synesthesia appears to play an important role in the art produced contradicts the notion of a trade-off – perhaps synesthetic perceptions support facility with metaphor, and other forms of artistic expression.

The question remains – why do the arbitrary associations of metaphor appeal to so many? If linkages are arbitrary, shouldn’t they be idiosyncratic, as well? Surprisingly, recent work suggests that arbitrary cross-modal pairings in synesthetes may not be as arbitrary as we thought – among synesthetes who experience letter-color pairings, Baron-Cohen and colleagues (1993) discovered subtle, non-random patterns – U is often yellow to light brown, I and O are often white, and X is often black. Even among synesthetes, where idiosyncrasy is the rule – commonalities emerge.

Learning from Neurodiversity and the role of the neuroscientist

Although synesthetic experiences blur the usually rigid boundaries of perceptual modalities and conceptual categories in ways that seem arbitrary, synesthesia offer a new framework for understanding how non-synesthete, or “normal” perceptual and conceptual processing are constituted.  I propose that although different from normal perception, synesthetic perceptions may be the manifestation of an extreme end of a continuum of human variation, in which implicit cross-sensory linkages “break through” into explicit perception. The ability of synesthetic artists of different kinds to reach broad audiences despite the idiosyncratic and rather arbitrary nature of their associations may belie some common, unconscious, less arbitrary associations that may resonate with neurotypicals. A final anecdote from a synesthete watching a figure skating routine seems to suggest that synesthetes, in their “abnormality”, see that which the non-synesthete cannot see but somehow also knows (emphasis mine):

“A young woman […] skated to a piece of music that was green and full of squares.  Her costume was totally black; her routine started out with curving motions.  It became uncomfortable to me to watch such a mismatch, so I just looked at my hands in my lap.  She placed last in her category at the end of the evening’s judging.” [Record of subject MLL; Cytowic p. 38]

Neuroscientists have an ethical obligation to take heed of these synesthete self-reports – not only do they underscore the rich neurodiversity that exists among us, but they also may lead to new, exciting areas for research. If, as I have suggested, cross-sensory pairings exist in all of us, studying the neural substrates that support synesthesia will illuminate common mechanisms of perception in synesthetes and non-synesthetes alike. Neuroscientists should remember that the boundaries between normal and abnormal are not always bright lines – and in the case of synesthesia, understanding synesthetes and neurotypicals as existing on a continuum of human neurodiversity can help us gain new insight into how perception operates in all of us.

Luria AR. 1968. The Mind of the Mnemonist: A Little Book About a Vast Memory. Cambridge, Mass: Harvard University Press.

Ramachandran VS, Hubbard A. 2001a. Psychological investigations into the neural basis of synesthesia. Proceedings of the Royal Society of London, B 268: 979-983.

Ramachandran VS, Hubbard A. 2001b. The Emergence of the Human Mind: Some Clues from Synesthesia. In Robertson LC, Sagiv N, eds. Synesthesia: Perspectives from Cognitive Neuroscience. New York: Oxford University Press, Inc. 266 pp.

Spalding JMK, Zangwill O. 1950. Disturbance of number-form in a case of brain injury. Journal of Neurology, Neurosurgery, and Psychiatry 12: 24-29.

This entry was posted on April 26, 2013, 11:37 am and is filed under feminist science, neurodiversity. You can follow any responses to this entry through RSS 2.0. You can leave a response, or trackback from your own site.