*Editor’s note: This post was originally published on The Neuroethics Blog. 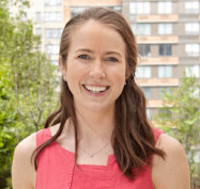 Carolyn Plunkett is a Ph.D. Candidate in the Philosophy Department at The Graduate Center of City University of New York. She is also an Ethics Fellow in The Bioethics Program at the Icahn School of Medicine at Mount Sinai, and a Research Associate in the Division of Medical Ethics at NYU Langone Medical Center. Carolyn will defend her dissertation in spring 2016, and, beginning July 2016, will be a Rudin Post-Doctoral Fellow in the Divisions of Medical Ethics and Medical Humanities at NYU Langone Medical Center.

This post is part of a series that recaps and offers perspectives on the conversations and debates that took place at the recent 2015 International Neuroethics Society meeting.

Karen Rommelfanger, founding editor of The Neuroethics Blog, heard a talk I gave on deep brain stimulation (DBS) at Brain Matters! 3 in 2012. Three years later, she heard a brief synopsis of a paper I presented a few weeks ago at the International Neuroethics Society Annual Meeting. Afterward, she came up to me and said, “Wow! Your views have changed!” I had gone from being wary about using DBS in adults, much less minors, to defending its use in teens with anorexia nervosa. She asked me to write about this transition for this blog, and present my recent research.

I was introduced to DBS in a philosophy course four years ago and was immediately captivated by questions like: Am I really me with ongoing DBS? Are my emotions really mine? What is an “authentic self,” or an “authentic emotion,” anyway? I wrote a term paper on the topic, and soon after presented on the topic at a couple of conferences. I wrote a post for the Neuroethics Women Leaders blog and published an open peer commentary in AJOB Neuroscience. It was a hot topic, as a couple  of other authors were asking the same questions at around the same time.

But when I presented my ideas to an audience at Brain Matters! 3, in Cleveland, Ohio, I was taken aback by one participant’s question. A neurosurgeon asked what she should tell her patients, and their families, when they request DBS to treat refractory depression or OCD. “Should I tell them no because philosophers are concerned that their emotions might not be authentic?” she wondered. I think I gave a wishy-washy answer about informed consent. It did not satisfy my interlocutor, or me.

Her question has stuck with me. It has forced me to reexamine the context in which I think about DBS, from the purely philosophical to the bioethical. Put another way, the neurosurgeon’s concern forced me to reconsider my earlier ideas about DBS—my purely philosophical questions about the nature of identity and emotions, and the relationship between them—and put them in conversation with more concrete bioethical questions about how DBS is actually used and by whom, and how it should be used, including how access to DBS and clinical research could be made more equitable and respectful. Her question drove home the point that bioethicists must take seriously the lived experiences of patients, families, clinicians, researchers, and others involved in the DBS process. These participants are not just characters in a thought experiment, as an analogy between DBS and Nozick’s infamous experience machine would suggest.

So I turned my focus from DBS itself to the experiences of those with the conditions that DBS aims to treat, like anorexia nervosa, depression, and addiction. Do they experience authentic selves or authentic desires? This shift ultimately drove me toward my dissertation project, which defends a subjectivist conception of normative reasons—or, roughly, the view that what we have reason to do is rooted in who we are, what we value, and what we desire. (There is a time and place for philosophy, after all.)

A few more classes and papers further propelled my changing perspective, leading me to my current research agenda on ethical issues in research on DBS for the treatment of anorexia nervosa. The central question I’m now investigating: Given that researchers are testing the efficacy of DBS for anorexia nervosa, should we consider enrolling adolescents in those trials?

Anorexia nervosa, or AN, is characterized by a distorted body image, excessive dieting and exercise that leads to severe weight loss, and a pathological fear of becoming fat. Though it does occur in men and adult women, AN has the highest incidence in adolescent women, and the average age of onset is decreasing. It’s not the most prevalent mental illness, but it is the deadliest: AN has the highest mortality of all mental illnesses and eating disorders. This is because of both dangerous physiological consequences and a high rate of suicide among anorexic individuals.

Despite its high morbidity and mortality, there are not well-defined treatments for AN, and the prospects for recovery are, unfortunately, not great. Among those who receive a diagnosis, the full recovery rate from AN is about 50%. About 30% of patients make partial recoveries, and the remaining 20% do not recover, even with repeated attempts at treatment — quite a substantial subset of AN patients.

For those who fall in that 20% — who are sometimes referred to as having “chronic” or “longstanding” AN — there are no evidence-based treatment options, even though there is evidence that those with chronic or longstanding AN require different treatment than those at an earlier stage of illness.* To date, there has been only one controlled study of adults with chronic AN, and no studies of treatments for adolescents with chronic AN. There is clearly a great need for research within the subgroup of patients, in particular adolescents, with chronic AN.

This is where DBS comes in. Readers of this blog are familiar with DBS, but they may not know that it has been shown to be a promising treatment for AN, even chronic AN, and even AN in a small number of teens. An emerging neurobiological understanding of AN supports the notion that DBS will be effective. Plus, case studies and case series [1, 2, 3] on the use of DBS in 14 women with AN have shown that it has been effective in increasing body weight and decreasing AN-associated behaviors in 11 of them.

DBS is not without risk. Along with the physical risks of hemorrhage, infection, and anesthesia, especially among patients with AN, there may be unforeseen negative psychological effects on sufferers’ self-conception and well-being. We might expect this to be especially true in adolescents, who are right at the developmental stage of figuring out who are and who they want to be. A “brain pacemaker” may disrupt that task.

These risks of DBS can be considered reasonable only if substantial benefit is expected from the trials.

I won’t go through an entire risk/benefit analysis here, but I do believe that such an analysis supports the idea that the associated risks of enrolling teens with chronic AN are reasonable, and that the harms of not allowing them to participate in research constitute a great risk. That is, the harm of excluding teens with AN from clinical research, and thus continuing the status quo in the treatment of chronic AN, are so substantial that it justifies the inclusion of teens, even in high risk research.

You might be thinking: Why not give the current research on adults a few years to see if DBS is an effective treatment for chronic AN in that population, and then move on to kids? Indeed, some ethicists have said that this is the way we ought to proceed.

First, a negative response in adults does not necessarily mean that DBS would fail in teens. In fact, data from a small study in China that enrolled teens in trials of DBS support the hypothesis that teens may respond better than adults. We should not predicate research on adolescents on data from adult trials.

And second, waiting for the adult data continues the trend of preventing participation in clinical research among a population that has, arguably, been “over-protected” from research to its detriment. The seriousness of AN and its high incidence in teens ground an interest in improved treatments for all teens with AN.

There remain obstacles to engaging this population in clinical research on DBS. Because I’m proposing trials for minors, we need to address not only barriers to establishing assent in teens with AN but also parental consent. Both are problematic with this population, but I think the problems are surmountable.

The upshot of the argument I pose is that we should look to enfranchise so-called “vulnerable” populations that have historically been excluded from clinical research. Justice demands it. An ethical and legal framework for clinical research should support responsible and safe research on treatment protocols for members of these populations rather than discourage it.

My views on DBS have changed after spending more time with the topic, considering it from a wider variety of perspectives, and asking different questions. I do not mean to imply that one set of questions or a particular perspective ought to be prioritized. Rather I hope to have highlighted the value of recognizing the limits of one’s research and exploring one’s interests from a variety of viewpoints to reach more inclusive and considered judgments.

*Some researchers call for classifying stages of AN to better guide treatment and research. Morbidity and mortality worsens, and recovery becomes less likely, the longer the disease progresses. Treatment protocols typically do not distinguish between someone with a first diagnosis and someone who has been ill for 5 or 10 years, and research studies usually do not divide patients with AN into further subgroups based on length of illness, even though there is evidence that those who have had the illness longer require different care than those at earlier stages.

This entry was posted on November 24, 2015, 10:17 am and is filed under Uncategorized. You can follow any responses to this entry through RSS 2.0. You can leave a response, or trackback from your own site.