Editor’s note: This post was written by Tyr Fothergill. Dr. Fothergill works as a member of the EU’s Human Brain Project. Below is a post about an interesting outreach effort from April 2018.

As part of my work on the Human Brain Project as a member of the Ethics and Society Subproject, I design and take part in outreach activities on behalf of my work package, Ethics Support. The most recent of these was at PAX East in Boston, MA, U.S.A.

PAX is an extraordinarily popular gaming convention held in multiple locations yearly, and is an excellent opportunity to embrace the “engage with diverse stakeholders” aspect of the Responsible Research and Innovation AREA framework (e.g. Stilgoe at al. 2013). Gamers are often early adopters of innovative technology, and PAX attendees may be amongst the first to benefit from the outcomes of large Brain Projects like the HBP. Furthermore, participants in PAX tend to be interested in deeper issues related to gaming and tech, and are excited to discuss these with experts. Gamers are often knowledgeable about technology and more comfortable being presented with complex or innovative research than other “lay audiences”. In addition, neuro-diversity is well-represented in the wider gaming community, which may make brain-related research more interesting or personally relevant to some participants. These attributes make the attendees of PAX an ideal range of stakeholders to reach order to bolster the public acceptability of research into AIs and brain-related technologies through the lens of gaming.

Attendance estimates of the 2017 PAX East convention range from 70,000 to 110,000 people. PAX features “typical” video game convention offerings like demos, meet-and-greets, panels by developers or gaming celebrities, opportunities to see or use new software or hardware, and terrible food.

PAX presents a remarkable opportunity for games and tech-based social research, awareness-raising, and outreach. I was invited to represent the Human Brain Project’s Ethics Support group at Dr. Catherine Flick’s Ask An Ethicist PAX booth, an established outpost of friendly, scholarly social inquiry which I helped to support in a non-neuroscience-related capacity in 2017. The Ask an Ethicist booth not only accommodates first-hand research (surveys, questionnaires, testing of programmes designed to increase tech or communication accessibility) but also involves informal conversations about technology, privacy, research, ethics, data, etc.

I created a PAX panel from an “infotainment” angle called “BRAAAAAAAINS: Archaeology and Philosophy of Zombies in Video Games” which covered David Chalmers’s “philosophical zombies” thought experiment, selected case studies from archaeology covering some origins of modern ideas around “zombie” that informed later depictions in films and other material culture. We linked these ideas to specific popular video game scenarios involving zombies, which led to a historical contextualisation of what zombies represent in terms of public opinions and trust. We touched upon issues around neuroscience and ICT, including consciousness, animacy, personhood, post-mortem agency, and undeath in video games, asking the audience whether general AI could potentially be considered a form of zombie, etc. We also took the opportunity to call attention to the U.S. Brain Initiative and Neuroethics division. 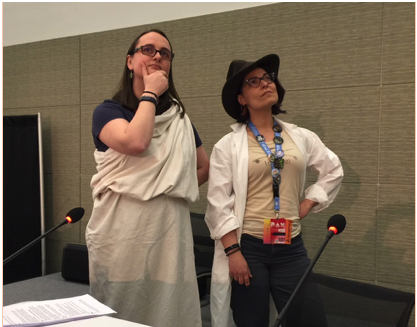 At the Ask an Ethicist booth, we asked PAX attendees a series of questions regarding video games, experiences, and research and innovation ethics over the course of the convention (e.g. “What video game represents a future that we should work toward?”), and received more than 400 responses. Approximately 370 people attended the BRAAAAAAAINS panel, and they asked 69 questions in the anonymous online forum during the panel, but we overran our slot and many sought us out at the Ask an Ethicist Booth later for further queries. The vast majority of questions we received were directly related to ethics and neuroscience or ICT. We ran out of time to respond to all of these, and plan to address them in future episodes of “Not Just a Game”, Dr. Flick’s ethics and gaming podcast. All told, we made more than 700 people aware of the Ethics Support group and the Human Brain Project.

I am confident that using video games as a way to engage members of the public with ethical issues in topics such as general and specific AI, “brain-inspired” computing, medical data, and neuroscientific investigation more generally) is impactful. When the story about prolonging the life of pig brains broke, I was immediately contacted on Twitter by someone who had seen our panel at PAX, and wanted to know what I thought about it.

The Prezi and the video of us speaking with the panel slides are available online.
Stilgoe, J., Owen, R. and Macnaghten, P., 2013. Developing a framework for responsible innovation. Research Policy, 42(9), pp.1568-1580.